February 24, 2008, was the 85th Giani Gurdit Singh ji. What better way to mark it than to get together and celebrate his life and achievements. Well, we did precisely that at the Punjab Kala Bhavan in Chandigarh.

Sardar Tarlochan Singh, an old friend and associate of Giani ji released a book on him in which over 40 scholars have written articles about Giani Gurdit Singh and his world.

Padam Bhushan Prof B N Goswamy, spoke on Giani Gurdit Singh and the impress that he left on the minds of those who met him.

Please click here to read a detailed report on the event.

Please click on the photograph that you see below to see more photographs of the book release.

Soon, videos will also be posted, do visit us more often.

Giani Gurdit Singh ji left us a year ago. On Thursday, January 17, 2008, the house that he build and where he lived the last many years of his life, was filled with the holy gurbani as members of the Akhand Kirtani Jatha recited shabads. Those who were close to him had gathered to remember him. We were all there—my mother Sardarni Inderjit Kaur, my brother Ravinder and our families. This was essentially a private family function that had not been notified publicly, but then with Papa, things were informal. Mera Pind, the classic by Giani Gurdit Singh ji has been reprinted because of popular and sustained demand for this book that has been in continuous print from 1961.

The new, eighth, edition is 480 pages and has been typeset again. It is now in a bigger type face and even the original graphics made by Ishwar Chitarkar, have been made bolder and better.

The cover illustration is by the artist R M Singh, who has been designing all the covers of Giani Gurdit Singh ji’s books for many years now. The background of a mud-covered house is taken from a photograph, shot by Roopinder Singh, of a house in Mithewal, the village that is Mera Pind.

The book has been printed on superior, imported paper and is available in both, soft cover and hardbound editions.

We are posting three tributes to Giani Gurdit Singh ji which were published in prominent newspapers. You can read what A J Philip, Senior Associate Editor, The Tribune Chandigarh, Nirupama Dutt a prominent journalist and writer and Nonika Singh a columnist for The Hindustan Times wrote about Giani ji by clicking on their names.

Messages and letters paying tributes to Giani ji and recognising his many achievements were received from many prominent people, including the Governor of Punjab and the Chief Minister of Punjab.

Giani Gurdit Singh ji passed away in Chandigarh on January 17, 2007. He had recently suffered two heart attacks, which had left him weak, but he was still active till he left for his final journey.

Please click here to read the news item that The Tribune carried about him.

Would you like to read the translation of the citation of the Punjabi Sahit Shiromani Award 2006 conferred on Giani Gurdit Singh by the Language Department, Punjab?

Since we have received a number of requests for more information about Giani ji, we are reproducing here an article written by Dr Mohinder Singh, Editor of India Journal, Santa Fe Springs, CA , USA. It was published in 2004.

Eminent Punjabi writer Giani Gurdit Singh, known particularly for his book Mera Pind that has sustained readership over the past four decades, has been awarded this year’s Punjabi Sahit Shiromani Puraskar by the state government.

Presented by the Punjab Languages Department, the award carries a cash component of Rs 2.5 lakh.

While even international bodies like Unesco have recognised the worth of Mera Pind, which awarded the author in 1967, recognition from the state government was considered long overdue in Punjabi literary circles.

Born on February 24, 1923, in Mithewal village, Giani Gurdit Singh has lived a versatile life of an academic, politician and religious scholar. He was the editor of a Punjabi newspaper, Parkash, which he brought out from 1947 to 1978, and also Singh Sabha Patrika, a monthly magazine devoted to Sikh history and divinity from 1973 to 1988. Considered a virtual classic of Punjabi literature, Giani Gurdit’s Mera Pind was first published in 1961; it is now in its seventh edition. It is a comprehensive study of the entire spectrum of life in a Punjab village, which has since long been part of syllabus in schools, colleges and at university level.

Apart from his prose, Giani Gurdit has also received recognition for his research work on Guru Granth Sahib and other Sikh scriptures. Currently he is busy completing a book on Purtan Birs of Guru Granth Sahib. In 1991, the SGPC recognized his contribution with the honorific of Gurmat Acharya.

The Advisory Board of the Punjab Languages Department, which held its meeting here today, announced the Punjabi Sahit Shiromani Puraskar for the eminent writer, Giani Gurdit Singh.

This is the most prestigious literary award given every year by the Department for contribution to Punjabi literature.

Giani Gurdit Singh is known in the literary world for his book Mera Pind that is considered a classic in Punjabi literature. The winner of this award gets Rs 2.5 lakh in cash. However, this amount is expected to be enhanced to Rs 5 lakh this year as the board made a recommendation to the government in this regard at today’s meeting. The award will be given in the first week of November. 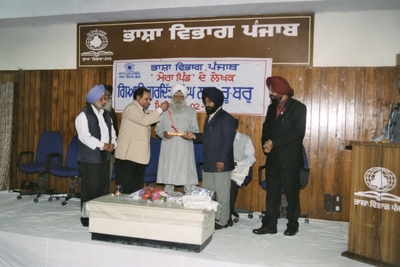