Farewell
He captured the soul of rural Punjab
Nirupama Dutt

HE immortalised Mitthewal, an obscure Malwai village of the Malerkotla state of yore in Mera Pind, a book that enjoys the status of a classic today, and the book, in turn, immortalises its writer Giani Gurdit Singh.

He was a scholar of great repute, who made significant contributions in the areas of journalism, politics, Sikh religious studies and Punjabi culture. However, he was best loved and is best remembered today for his little epic that captured the heart and soul of Punjab’s rural life as it was in yesteryear.

This is not to say that his contributions in other areas were any less. He played a pivotal role in the establishment of Punjabi University, Patiala. On the basis of his report filed to the Shiromani Gurdwara Parbandhak Committee (SGPC), Takht Sri Damdama Sahib was established as the fifth Takht.

The Giani was the founder of the Sri Guru Granth Vidya Kendras in Delhi and Chandigarh. In fact, he was a towering figure in post-Independence Punjab, who held important posts and received many honours. But what set him apart from others was his integrity and refusal to budge from what he held true, no matter what the political climate of the time was.

A robust and earthy sense of humour and courage of conviction kept him active and alert, in spite of setbacks to his health, to a ripe age of 84. He authored scores of books on culture, folklore and religion, having started his career as the editor of Prakash, a daily Punjabi newspaper from Patiala he started in 1947.

His literary circle in those days included writer Suba Singh and Prof Pritam Singh. A spontaneous essay, written in his daily in 1953 on his village paved the way for Mera Pind, published in 1961. The Encyclopaedia Britannica calls the book ‘one of the most outstanding novels depicting rural life in Punjab.’

Well known writer Khushwant Singh had said of Mera Pind: ‘The book gives a lively picture of pastoral life, written in delectable prose, studded with aphorisms, anecdotes, proverbs and songs. The one thing that will give Mera Pind a long lease of life, if not immortality, is the fact that the author has used the Punjabi language as it is spoken by the common people.’

As the news of the Giani’s demise spread in literary circles, short story writer Mohan Bhandari says: “I have said it before and I am saying it now that even 12 Sahitya Akademi awards for this book would have been less for in it is encased the soul of Punjab.”

The book that defied classification did not win the Sahitya Akademi award but awards never make a book, readers do. Running into its seventh edition, the book is one of the best read in Punjab and commenting on it poet Surjit Patar says: “If you haven’t read this book, you have missed much of Punjab.”

Mera Pind portrays the innocence and simplicity of the Punjabi village before the intervention of ‘development’ and materialism. Paying a tribute to the Giani, Punjabi critic Bhushan says: “Mahatma Gandhi had said that India lived in its villages, and I say that the village lived in Giani Gurdit Singh.” 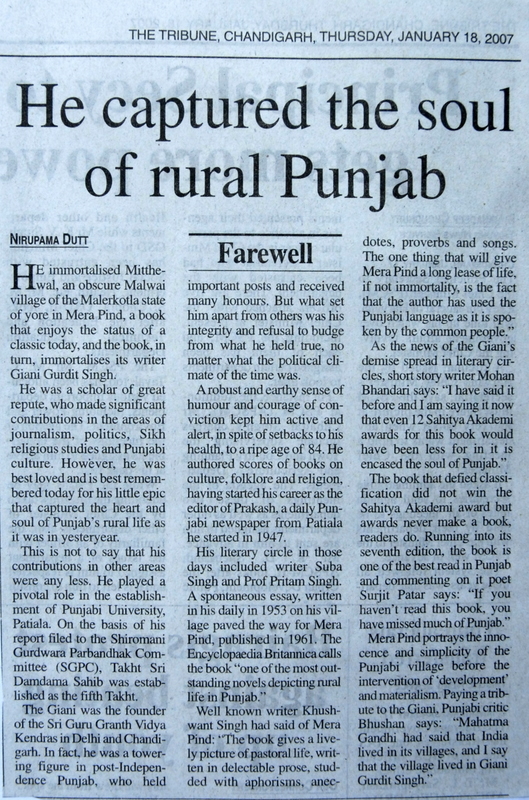